Start a Wiki
TechGalxy was Founded By Tapasko, It was originally made for Tapasko's home so he may live In Peace.

After Geekville members started to be less active, Tapasko wanted to find his own land to call home, He started from ShadowT and made his way north towards the ocean, In which he found a small Island now where the Tower Of Power now Stands, after the Tower was Build ,Tapasko was talking about his new house he had just made on the Chat when yo4you asked If he could join him on his land Tapasko Said yes and TechGalxy went from a private land to booming town and will be a booming city.

TechGalxy now has an Above Ground Portal It's next to Edge's.

UPDATE: Techgalxy now has a second above ground portal called Tech-down (The red and white one next to the other portal)

Techgalxy is split into 3 Districts they are:

Tech-Prime: this area Is where the first portal was made and where most of Techgalxy members build and live.

Tech-Down: Is a Down-Town area where People can build tall builds this is also where the Techgalxy Hunger Games Arena Is.

Tapasko has a few Test and mess about Servers that everyone on VGA can use, Because Taps run these off is PC's hard-drive you will have to ask him which one you would like, Below are the Minecraft Server Taps can Run,

Taps Min-Imator Server this server has a load of random Plugins just for making Minecraft Movies on.

Tapasko can run over Server if needed like a 1.6.2 Server (if you want plugins let Taps know First)

All members of Techgalxy get access to Tapasko's Main TechgamerLive server, we use this server to make test builds and plan stuff for our bigger build project and just to scew around in creative mode (Techgalxy members will get acces to gamemode 1, some members get acces to WorldEdit). If you want to join ask Tapasko either on our forum post, in game or on skype.

There are also other people on the server some of them playing in survival mode.

On the 30th of June 2013 the 1st annual Techgalxy Hunger Games was held on the border of Techgalxy and Tech-Down, Tapasko,yo4you,goodHardLife and Haldrie Hosted the event with only 1 hickup, we had a lot of feedback on this event asking if we would do more like this and we will Below are some Photos taken by Lidien.

1st Round Winners Bubba145's so happy

Oh god so much Blood

wrath of the Mods

Close Up of the winner

Tapasko,Yo4you, SarahJD, Goodhardlife and Allukain are always working to make new and old members everyday task easier we have auto-farmers every sheep color in pens and 3 very large Mines but these are only for members of the City,

The Tower of Power

view from the portal

View from above the giant cactus 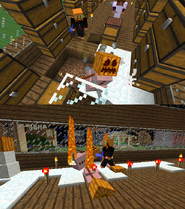 The snow golem whisperer
Add a photo to this gallery
Retrieved from "https://minecraftawesome.fandom.com/wiki/TechGalxy_(2nd_World)?oldid=6652"
Community content is available under CC-BY-SA unless otherwise noted.